We’re going once again back to 1987 today.  The finest year in Transformer history provided me with one of my clearest childhood memories of receiving a Transformer.

It was Christmas day, I was an over excited 4 year old who was ready for Christmas.  I had stayed with my Grandparents that year (this was before the great England / Wales divide of my youth), not entirely sure why, but well I think being the child of divorce I spent more time with them than my actual parents, who both worked full time.

Now, I have mentioned before how it seems I was quite a spoiled child (probably the divorce thing) and I always seemed to do pretty well at Christmas /  birthdays / random weekends, present-wise.  But this year, this one was.. an exception.  I never had a pile of presents compare to it again, and for the next few years the hauls were not exactly small.

So, I get up Christmas morning, nice and early, because 4 and excitement and stuff, and I stroll over to the lounge.  Once I’m in, I glance at the sofa.  Well, I tried to any way, the whole thing is absolutely covered in presents.  And a big sign.  It said “All for Chrissy for Xmas”, obviously Chrissy was my grandparents cutesy name for baby me, but I had no idea what Xmas was.  Xmas?  What the hell was an Xmas?  I waited for what seemed like eternity staring at this pile of presents trying to work out whether I was allowed to open them or not.  Luckily my Grandparents walked in shortly after – I must have woken them with my frantic spying at the paper, and let me unleash myself upon the pile. I forget what most of the pile was, because A) I’m old as shit now and B) there were only two presents that mattered to me.

The first robot I opened was Megatron, ok ok, very cool.  I didn’t think Megatron was available in store this year, so I’m not sure how it came about to be one of my presents.  I assume my Grandad had found it in some left over stock somewhere, but there he was and he was mine.

Megatron was great and all, but there was another one to open, which brings me on to what is now, probably because of this very memory, my favourite domestic release Decepticon.  You can most likely guess from the title of this article, but it was the Decepticon Targetmaster, Slugslinger.  I hadn’t seen rebirth by this point, so the Targetmaster and Headmaster concept was new to me.

Everything about Slugslinger was great.  From the box art (yes yes, it’s my thing, you know that), to his awesomely cool dual-cockpit fighter mode and to his bad-ass looking robot mode with a decent wingspan and great colours.  Plus he came with a tiny dude, who transformed in to his boomer.  That’s what my son calls the.. well, tiny dudes and is his somewhat nicer nickname for guns.

So this was my first Slugslinger and he lasted a few years, before taking a great fall which resulted in both his wings falling off.  I fixed him up as best I could but he was never the same, poor lad.

I managed to pick up another one in my mid teens, those paper round benefits again which lasted until I sold everything up like a mug.  Which of course got sold in the great Follow My Penis years at 19.

I managed to pick up my third Slugslinger at TFNation 2018 from ToyFu, which was great.  I get to buy my favourite Decepticon and help a charity at the same time.  Nice.

And now we come to this space year 2019.  I’ve decided to build a properly themed collection aroud boxed 1987 releases.  My new Slugslinger has travelled to me all the way from Vancouver.  Such are the wonders of the internet.  Protip here, do not use Fedex unless you are wanting to spend a small fortune on getting him here – I had mine sent to the company I work for’s office in Vancouver and had one of the guys I know there send it over, he didn’t check with me before it got posted and it cost me $236 CAD.  Good lord.  I mean, I still got it for a decent price, and I guess it was the karma for the super cheap sealed Highbrow I got the other week.

The example I have is over all in pretty nice shape, the chest circles which are notoriously hard to get with all the chrome intact is one of the better ones I’ve seen, though still far from perfect.  The box itself has a few issues, some small dings and scrapes and a bit missing where the tape was.  But the art is intact and from the front, it looks bloody wonderful.

I cannot really put in to words how much this guy means to me in the form of happy childhood memories.  Anything I got from my Grandad has a special place in my heart but, this guy is the first, STRONG memory I have of Transformers and is definitely one of the figures that has sent me on this 30 year quest.

Any way, enough word and sentimental bullshit, here is my kitchen table featuring this guy. 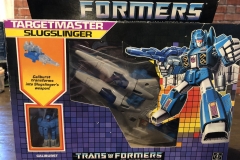 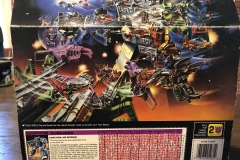 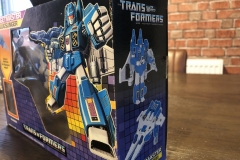 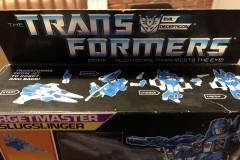 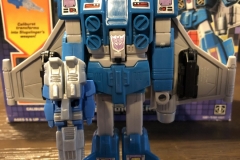 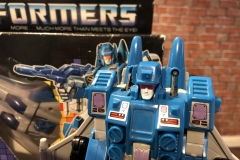 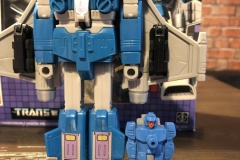 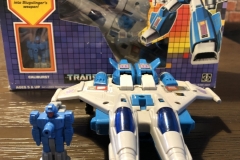 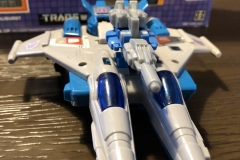 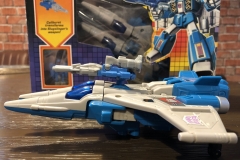 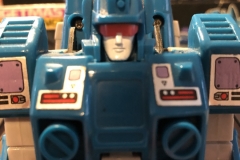 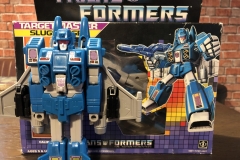