Going back to another relic from my childhood today, pretty sure this guy was a birthday present but well, I’m old now and the memory isn’t what it used to be.

M.A.S.K Bulldog, or Bulldoze as it was known in central Europe for some reason, is a semi-truck that converts in to.. well, sort of a tank I guess?  It has tracks so that will do.

Introduced in season 3 of the cartoon, as part of the racing series, by taking part in a demolition derby event.  Obviously this was during the Cold War and Boris “The Czar” Bushkin, the driver, was characterised as a stereotypical Soviet, even calling his mask Comrade.  Frankly I’m amazed they actually made him a M.A.S.K agent and not Venom.
Growing up watching the cartoon I actually thought they called him Bizarre rather than The Czar, but I guess it does sort of make sense eh?

Any way, back in the “good” old days, or at least the days when I had no cares or responsibilities, I got Bulldog and Buzzard at the same time.  Pretty sure I even maybe got Wildcat at the same time?  I know I definitely had that guy at my Grandmas house.  But yes, Bulldog.
Bulldog was one of the larger vehicles so probably came at a premium price point, not quite as complex as Rhino or Outlaw but certainly had a lot of play value.

The thing with M.A.S.K toys is that most of the gimmicks were automatically activated, and being more of a Transformers guy, where you had to do everything yourself, they never really held my attention as well as them Robits in Disguise.

Let’s take a little walk around the truck.  It has some very nice detailing, lot of panel lines and rivets moulded in.  The chrome touches were very nice, some parts of it are starting to wear on mine but overall it’s still in pretty good shape.  They came with rubber tyres, which obviously will start to perish at some point, these ones are still somehow fine and haven’t even started to go sticky yet, nice.  It has a trailer hitch, but there was never a trailer produced to go with it, if you can find one that matches the scale it does look pretty good.  I should see how it looks with an MP Prime trailer*.

To convert Bulldog to tank mode, you just gotta press the button behind the trailer hitch, flip out the top of the cab and missile launcher bay, and fold the exhaust pipes down to look like some shiny chrome lasers.  Lastly, or firstly, whatever it doesn’t matter, flip the read wheels so they become tank treads.  You’re done.  You can then reposition Boris so he sits in the front, so he can you know, see where he is going.

In tank mode you gain some nice detail on the hatch, a small saw blade type thing pops out the front which looks pretty shitty and a couple of stubby lasers pop out from under the grill, just above the bumper.

When I first started entertaining the idea of buying up some M.A.S.K stuff I thought I was going to be seeing them through rose tinted glasses and that they wouldn’t have aged well, lacking the complexity of Transformers, but you know what, they’re great.  It was a brilliant toy line, had some good media back up and I’m really hoping the small tease we’ve seen from the licensing expo in June pans out to something interesting in the M.A.S.K future, it deserves it!

Right then, kitchen view, with Bulldog and a guest star. 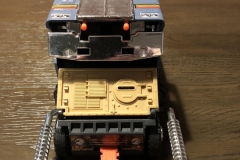 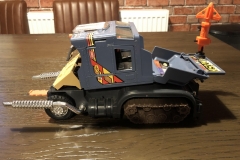 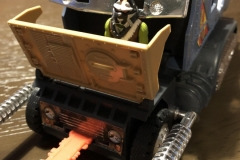 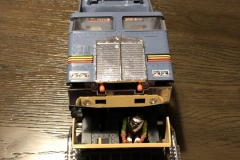 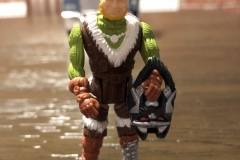 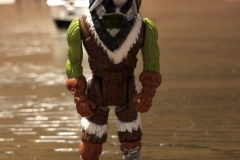 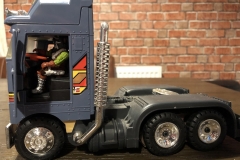 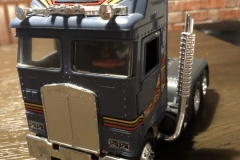 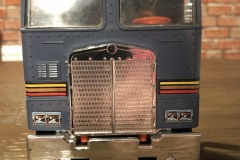 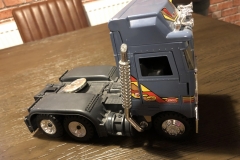 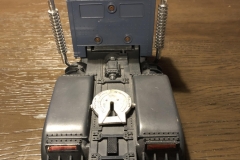 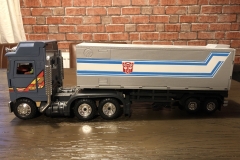 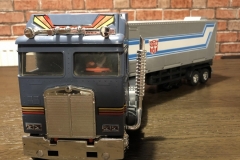 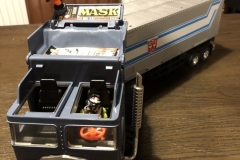 *I saw how it looks with an MP Prime trailer, it kinda works.