Let’s get back to it!  Summer is over, the child is back in school, all the holidays are done and free time in the evening is sort of back on the menu.  It’s time to saddle up, get back on my bullshit and start writing up some stuff that no one really needs to know again!

Today we’re taking a trip down memory lane yet again, thanks to a recent ebay purchase of yet another glorious, golden, safety hazard in waiting.

The year was 1989, I was somewhere between 5 and 6 years old, the local toy shop was stacked to the brim with something called Pretenders!  Pretenders?!  Those are weird Transformers, wasn’t much in to that idea as a wee lad.  I’ve since changed my opinion of course and think they are pretty wonderful, but, back then, they were very limited and lacked the appeal of previous offerings such as Powermasters and Headmasters and any other masters you can think of.

But, there were two that stood out from the rest, these so called “Ultra” Pretenders.  Yeah these looked kinda cool, I went in to Beatties in Winchester most weeks to catch a glimpse of what was on offer, these kind of pushed my buttons, they had a decent looking vehicle you know!

First there was the Decepticon, Roadblock.  A green riot wagon with a bulldozer blade on the back, that came with a purple and black jet man, and a small golden robot that around 10 years later was likely to explode if you looked at it wrong.

Then, there was the Autobot, Skyhammer.  A gold (eugh) and red flying fortress type thing that came with a red and blue jet man and another golden tiny boye.  So much gold, so much tragedy waiting to occur.

I managed to get both of these at the same time, the benefit to being a child of divorce is that when you go in to hospital for a minor operation to correct a hernia, both sets of parents think the best way to make a 6 year old feel better is to buy them a toy!

Fast forward to now, I recently managed to snag a very nice Skyhammer with only one tiny bit of visible GPS on ebay for a pretty decent price.  Obviously I was expecting it to get turned to dust in the box as it was being delivered, but luckily it has remained intact.

So, Skyhammer, weird flying fortress thing for the shell with spinning blades for VTOL capabilities, you can raise a gun platform for the tiny goldsplosion bot to stand in and pew the heck out of his enemies.  then we have the Pretender robot shell, which turned into another type of jet in which you can house the smaller robot.  These in turn can be housed in the larger shell.

The colours on Skyhammer work really well, it’s just a shame that it had to be gold.  It looks good, but damn is it scary to play with now.  I hope you all appreciate The Fear I experienced in taking this series of photos.  I don’t think I will ever touch the smaller robot again for fear that his arm is going to make the chest crack open on the next movement.

Oh, and!  We no longer use the kitchen table, during the summer break I moved all my nerd stuff upstairs so that the spare room actually gets used for something, and I now have a built in desk with space on it! At least, temporarily any way! 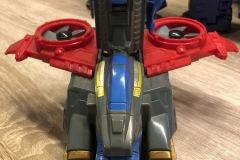 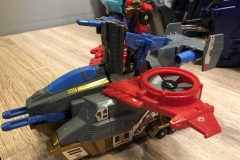 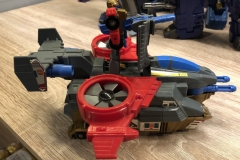 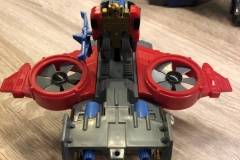 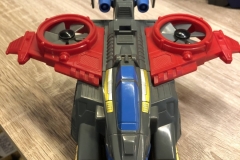 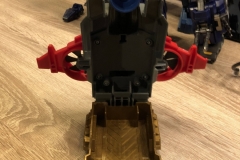 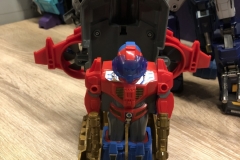 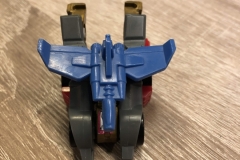 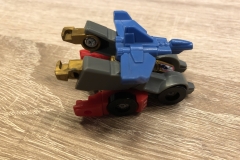 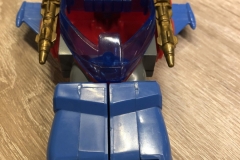 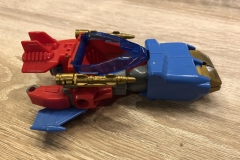 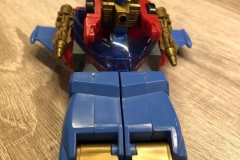 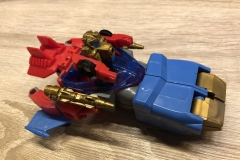 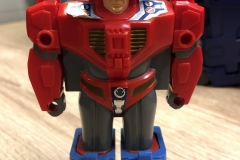 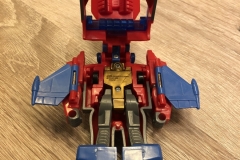 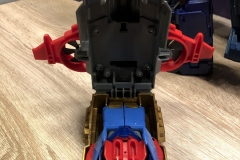 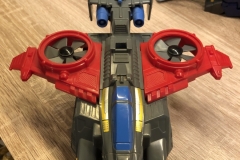