So let’s talk about Centurions.  No no, not an officer in the Roman army.  Centurions, with Power Extreme and all that.

As a kid, I thought Centurions were great, regular looking dudes with cool interchangeable weaponry that could be teleported around the world fighting terror.  Dr Terror, that is.

I had a few episodes on VHS (I’m old, y’see) and by the time Cartoon Network got around to showing them, I wasn’t really interested in anything other than Transformers.  I remember one Christmas getting a tiny Max Ray with a clip on torch, but none of the actual figures and weapons systems.

Now as it happens, recently I managed to obtain all the dudes, Ace, Jake, Max, Hacker and Doc Terror.  I’m going to take a look at Ace first, as I don’t currently have any extra weapons systems for him so it won’t take as long.

Ace McCloud, dashing, daring stereotypical hero type.  He is the aerial assault member of the team, hence his weapons systems being Sky Knight, Skybolt and Orbital Interceptor.  I only have Sky Knight currently, but man they all look pretty good.

The Ace figure himself has some pretty decent articulation for it’s time.  Moveable neck, elbows, knees, should and hip joints.  Sort of well balanced, it will usually stand up with minimal fiddling, even with the armors attached.  I guess the closest comparable figure would be Action Man.
There is also a feature built in to the action figure armor which allows a gimmick when you rotate an item that is clipped in to the central ports.  In Jakes case, it makes some of his guns/radar/whatever swivel.

All the armor clips on in to the various points on the figure body, some are of slightly different sizes so you can experiment to see what you can make, in fact, in the instruction sheet, you are encouraged to mix and match different weapons systems.  Novel, I like that.

Now as it was included in the original box along with Ace, Sky Knight is one of the more basic weapons sytems, it’s not particularly huge and in this case, doesn’t feature a firing missile (Max and Jake’s in box systems do) but it still looks great. 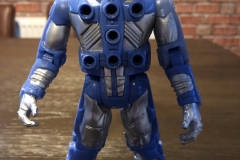 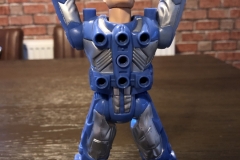 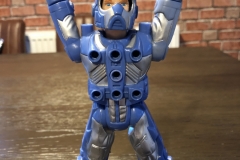 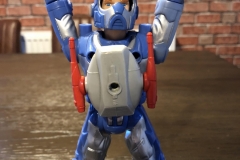 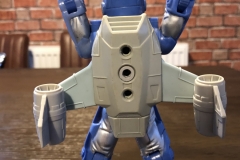 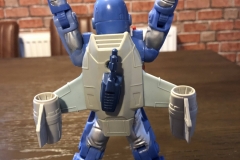 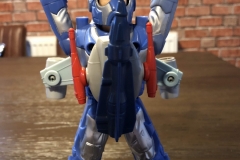 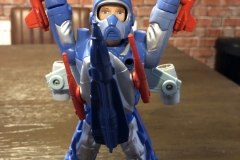 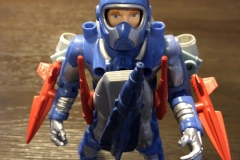 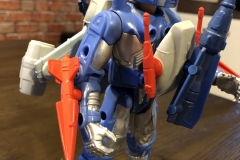